Plant a tree in memory of Joe
An environmentally-friendly option 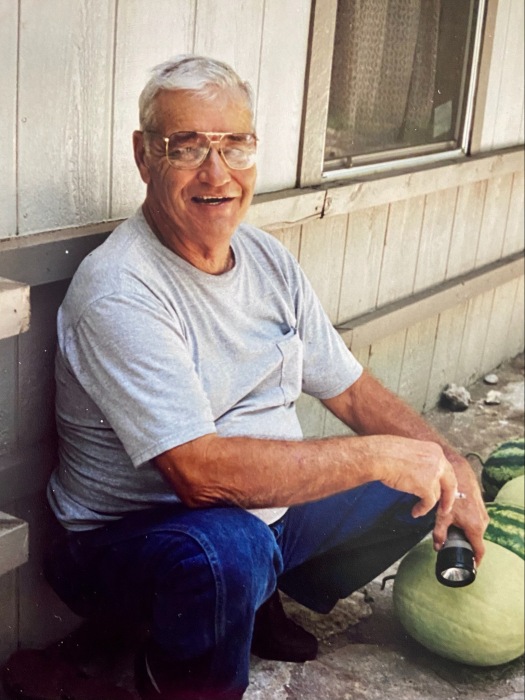 Joe Bailey Jr. was born in the small town of New London,Texas as the first son born to Joe Bailey Roberts, Sr. and Jessie Naomi Roberts on July 18, 1932.  Approximately one year later his father Joe Bailey Roberts Sr., while working for the Humble Oil Company (now known as Exxon), moved the family to the then boomtown of Wink, Texas. His early years were first spent in Wink.  In 1941 the family moved to Munday, Texas.  He grew up to be a handsome, physically strong and head strong, rambunctious young man.  He worked beside his father moving houses and farming.  At the age of eighteen, he married his one and only wife Paula Ann Kelley.  He continued working with his dad but also did a lot of other odd jobs, several of which were working for a crop duster pilot and driving long haul trucks.  Around 1952 he and Paula moved to San Antonio,Texas for a brief period of time before returning back to Munday.  On November 20,1953 in Haskell, Texas Paula gave birth to their first child, a son. December 11, 1955, again in Haskell, Texas, she gave birth to their second child, another son. In mid-1956 the family moved to Odessa, Texas for a short stay and by the early part of 1957 moved to Hobbs, New Mexico.  In both cities he worked at various jobs in the oil fields driving trucks and also as a deck hand on oil rigs.  They moved back to Odessa in December of 1962 and he continued working in the oil field and also as a long-haul truck driver.  November 10, 1964, Paula gave birth to their daughter in Odessa.  In the late summer of 1968, the family moved to Waco, Texas.  He worked as a long-haul driver for another six years before returning back to farming with his father and younger brother Don.  By 1980 he went to work full-time for TSTI and continued working there until he retired.  Not long after retiring he and Paula moved for the final time to their land not far from Aquila, Texas.  There they started a Christmas tree and peach tree business.  One notable thing that he enjoyed was organizing, fixing up and meticulously maintaining this homestead and land.  Throughout his adult life he worked hard at providing a good home and living for his family and raised three very good, hard working children.  He took great pride in working long, hard hours throughout his life.  Passing on his work ethic to his children he would say, “I don’t care what you do for a living, come by it honest.”  His public persona will be missed, especially his one-line quips such as “That’s tighter’ than Dick’s hatband!’.

Plant a tree in memory of Joe by clicking here.
To send flowers to Joe's family, please visit our floral store.

Plant a tree in memory of Joe
An environmentally-friendly option

Plant a tree in memory of Joe

1 tree planted in memory of Joe

RIP Grandad, you will be deeply missed.

A Memorial Tree was planted for Joe Bailey Roberts

Plant a tree in memory of Joe