Plant a tree in memory of Paula
An environmentally-friendly option 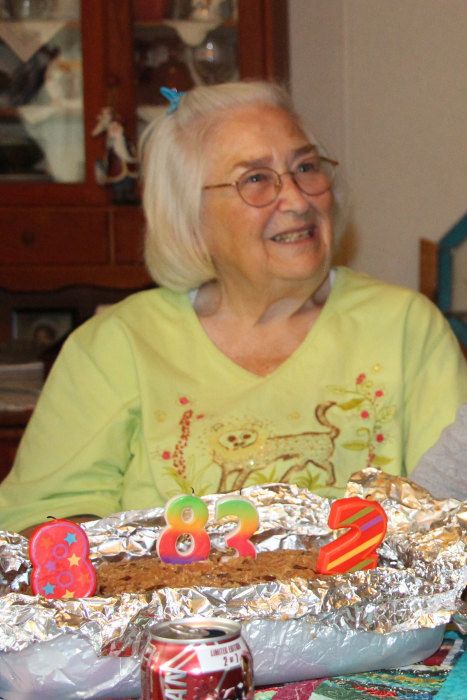 Paula was born at home in Brushy, Texas (no longer exists) as the second child of six children to William Henry Kelley and Verner Opal (Lewis) Kelley on June 6,1933.  Her life was a testimony to the dedication and love of her family.  She was a quick study for problem solving and also had a huge loving heart.  Our family could not have had a better mother and our dad could not have had a better lifelong wife.  One outstanding thing our mother did was to get us to attend church of Christ services as often as possible, which led her children to try and be good servants to our Creator.   Paula retired from 22 years of service at TSTI (since retitled TSTC) and then spent the rest of her life on "the farm".

She was raised on a farm just north of Brushy which was approximately ten miles southeast of Goree, Texas.  She lived there until she married (eloped) Joe Bailey Roberts Jr. at the age of 17 on October 10,1950.  As a newly married couple they soon moved into her husband’s mother and father’s house in Munday, Texas for a brief period of time.  A small house was moved onto the northeast corner of the Roberts’s for Joe and Paula.  She graduated from Goree High School in 1951.  During this period of time, she worked in a drug store in Munday and was good at making tasty milk shakes.  She and Joe resided there for approximately a year before moving to San Antonio for a brief period of time, before returning back to Munday to live there for several more years.  On November 20,1953 in Haskell, Texas she gave birth to their first child, a son.  December 11, 1955, again in Haskell, Texas, she gave birth to their second child, another son.  In mid-1956 the family moved to Odessa, Texas.  In the early part of 1957, the family packed up and moved to Hobbs, New Mexico.  After moving three times within Hobbs, they finally found a house, 407 W. Mesquite Dr., that they lived in until January 1961.  In the fall of 1959 their first son, age of 5, started elementary school.  The need for more money in the household arose and Paula took on a part time job selling home decoration products.  In January of 1960 they then moved across town to 1241 N. San Andrews Dr. (since renamed to San Andreas Dr.).  In the fall of 1961 their second son started first grade, at the age of 5.  In December of 1961 they again packed up and moved back to Odessa.  Paula found work in the accounting offices of the Ector County Hospital and worked there until the late summer of 1968.  November 10, 1964, she gave birth to their daughter in the Ector County Hospital.  In the late summer of 1968, the family packed up again and moved to a small suburb north of Waco,Texas called Northcrest-Lacy Lakeview.  She was hired by Hillcrest Hospital in the accounting offices where she worked only for a short period of time.  Sometime in early 1970 she went to work for Texas State Technical Institute in the security office.  Through her 22 years of working there, she steadily moved up the ladder within the pool of office workers.  During this period of time, she became politically active and served on the city council of Northcrest for approximately four years before electing not to pursue anything any further.  She finished her working career as one of the main people in the placement office of TSTI for the students at the college.  She was a highly respected, well liked and a missed employee when she retired.

From this time to the end of her life she was always busy with a seemingly endless number of things she wanted to do.  Together her and Joe created and managed their successful Christmas tree farm and peach orchard for several years.  Throughout her life Paula was an artist with many paintings on canvas and china to boast about.  As the years passed, she developed a passion for quilting.  She created many quilts some of which were displayed in the National Quilter Magazine.  One quilt was so good that it traveled and was displayed throughout the entire world for nearly three years.

One thing she relished were family gatherings for any and all occasions.  She always had a big smile and infectious laugh at those gatherings, which provided many of us with a never to be forgotten warm memory of her.  To add to this, she was a great "country cook".  She made simple meals that were as good as any gourmet meal.  Her gravy and biscuits were so very good.  She was schooled in preserving foods and it cannot be counted how many types of food she canned and or pickled in her lifetime.  She loved pickled okra.

To say that she was a multi-faceted, multi-talented woman is a slight understatement.  It should be understood that the list of other smaller projects in her life would take a small book to write about them all.

She is truly loved, missed and fondly remembered by her family and all that came to know her.

Throughout her life she tried to live a dedicated life to her Creator.  She lived her life as she was taught as a child and as a young adult, being raised in the church. Her life is a credit not only to her parents and family but first and foremost to her Creator.  It is our fervent hope that she has already heard the words... ‘Well done, good and faithful servant; you were faithful over a few things, I will make you ruler over many things. Enter into the joy of your Lord.’

Plant a tree in memory of Paula by clicking here.
To send flowers to Paula's family, please visit our floral store.

Plant a tree in memory of Paula
An environmentally-friendly option

Plant a tree in memory of Paula

RIP sweet Grandmother. I will love and miss you forever.

Until we meet again...

Worked for HILCO Electric for many years.  Did a story on the Tree farms for the Co-op Power Magazine one year.  Enjoyed the next years knowing Paula and Joe.  Sorry to hear of their passing.  Praying for your family.

Plant a tree in memory of Paula